The aim of nb-flow is to offer a variety of IoT sensor applications. When choosing a battery powered option, the battery should last at least one year. To be able to predict the battery life, one has to understand the power consumption of the nb-iot modem with all the variables that can change.

Those variables can be:

Another factor that affects the power consumption is which modem is used in the first place. In this blog post, a Quectel BC95-G modem is used.

This blog post will focus on signal quality, antenna and packet size.

The following components were used:

Below is a diagram showing the setup: 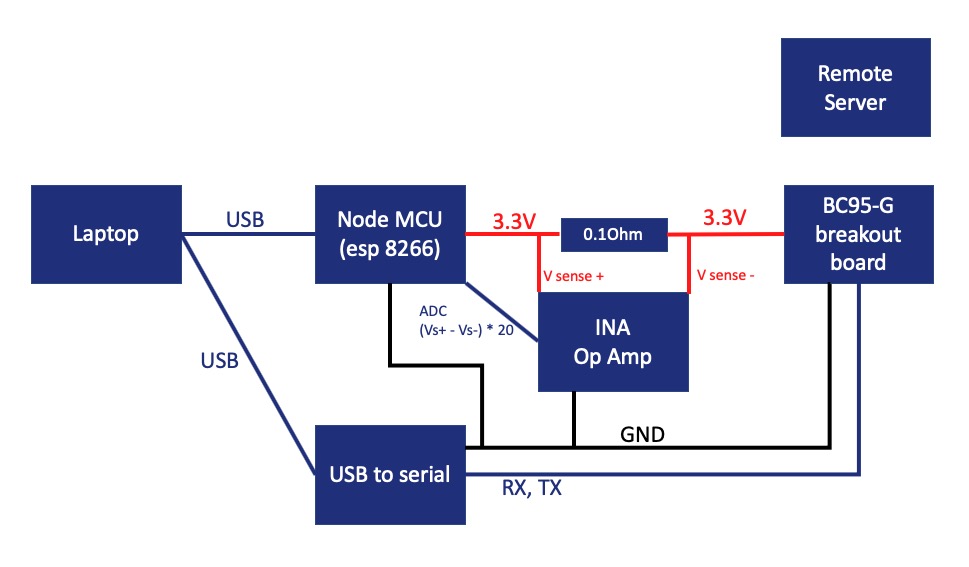 And this is a picture of the setup: 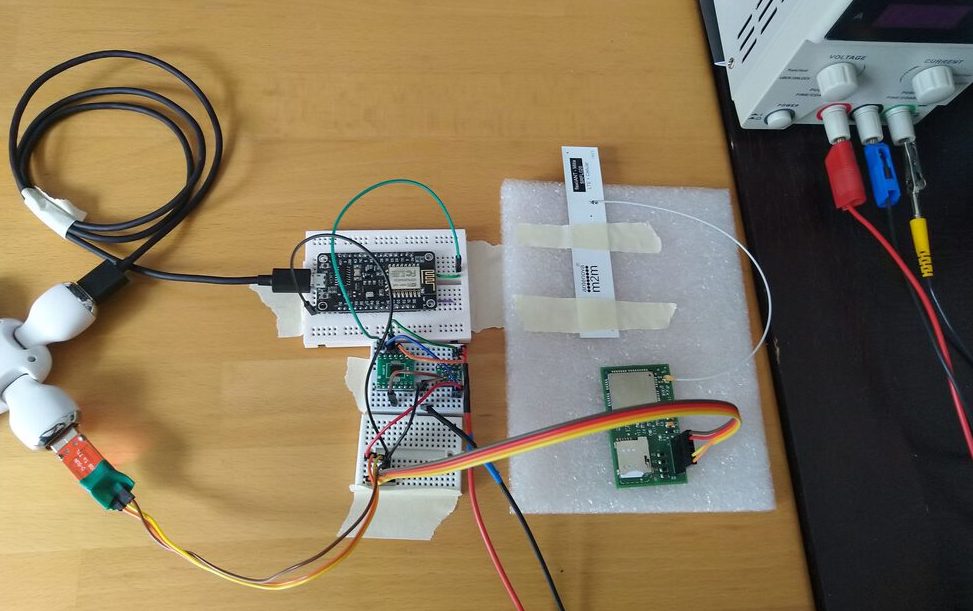 (please note that the pictures does not fully correspond to the diagram as a lab bench power supply was used to power the modem. But as the setup had to be portable it was then switched to the 3.3V regulator on the NodeMCU board)

This is a low cost setup which does a good job at comparing test results. The improvements section lists the drawbacks of this setup.

The following 4 parameters are outputs and can be used to "evaluate" the test results:

Both scenarios were tested with two different antennas:

Both of the antennas are flexible antennas that can be mounted inside a housing.

The tests are automated and create a png image as an output that is plotted with matplotlib. The following picture shows the result of test number 8 (the row below with 08.png)

Explanations for the orange labels above:

The picture below shows a zoom of the first packet of the chart above. You can see that though the packet arrives after ca 2 seconds (orange and green x), the modem consumes power for ca 15 seconds.

There is a youtube video from Quectel that analyses the BC68 (which is the same as the BC95-G, just a smaller form factor). Unfortunately the image quality is not so good to be able to read the exact power consumption, but the graphs look similar.

The picture below shows the result from test 16. The peaks when the packet is sent are close to 250mA. Also the time that the modem is consuming power after the packet is ca 40 seconds compared to the ca 15 seconds in the chart above.

During one test at marginal signal quality the modem got stuck and did not sent the packets anymore. It is interesting to see that the power consumption is at around 13mA when it is stuck. As this is quite high and could drain the battery, the microcontroller that is controlling the modem has to watch out for this state and either turn off the modem or restart it.

We will improve the ADC readings to get rid of the zero offset. As explained above, the ADC showed the modem was consuming power even though the lab power supply did not indicate it. To get better absolute readings, it is crucial to use an accurate ADC.

Currently, the logs from the server are copied manually after the tests. This will be automated so multiple tests can be conducted back to back without human intervention.

In the next blog posts, the following parameters will be changed:

Thanks for reading, if you have any questions about the article we are happy to answer them. Just send us an email (info@nb-flow.com).